In churches and convents and other religious communities, sisterhood takes many forms, forged and tested by such mundane threats as disease and despair, but also by terrors both spiritual and cosmic-Satan`s subtle minions and the Lovecraftian nightmare of the Outer Gods.

Sisterhood: Dark Tales and Secret Histories presents sixteen horror stories by some of the genre`s leading female voices. Their settings range around the globe and across the centuries, from 14th century Spain to 17th century Virginia to England in the present day.

In this collection, find my Mythos-inspired story “From an Honest Sister to a Neglected Daughter” written as a prequel to “The Dunwich Horror”.

Now available wherever books are sold, including DriveThruFiction.com. 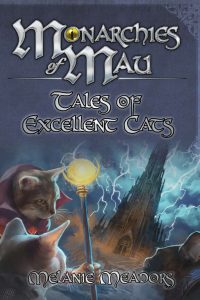 Read “My Name Is Cybernetic Model XR389F, and I Am Beautiful” for Free! 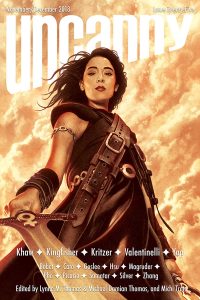 Hey readers! Today I’m pleased to inform you that Uncanny Magazine Issue 25 in all its beautiful glory, is now available for you to read online. My short story, “My Name Is Cybernetic Model XR389F, and I Am Beautiful”, went live today along with “The Thing about Ghost Stories” by Naomi Kritzer.

There are a LOT of great stories, poems, and essays in this issue which also includes “How to Swallow the Moon” by Isabel Yap, “An Account in the Land of Witches” by Sofia Samatar, “Smile” by Beth Cato, “Monologue by an unnamed mage, recorded at the brink of the end” by Cassandra Khaw, and a primer for Jewish Science Fiction and Fantasy by Steven Silver.

Announcing the Table of Contents for Sisterhood: Dark Tales and Secret Histories

In churches and convents and other religious communities, sisterhood takes many forms, forged and tested by such mundane threats as disease and despair, but also by terrors both spiritual and cosmic—Satan’s subtle minions and the Lovecraftian nightmare of the Outer Gods. Sisterhood: Dark Tales and Secret Histories presents sixteen horror stories by some of the genre’s leading female voices. Their settings range around the globe and across the centuries, from 14th century Spain to 17th century Virginia to England in the present day.

“The Wine of Men” by Ann K. Schwader
“From an Honest Sister, to a Neglected Daughter” by Monica Valentinelli
“Étaín and the Unholy Ghosts” by Lisa Morton
“The Barefoot Sisters of Saint Beatriz of the Mountain” by Kali Wallace
“Unburdened Flesh” by Penelope Love
“Only Dead Men Do Not Lie: The Trials of the Formosans” by Kaaron Warren
“Jane, Jamestown, The Starving Time” by Sun Yung Shin
“Dorcas and Ann: A True Story” by Molly Tanzer
“The Resurrected” by S. P. Miskowski
“The Low, Dark Edge of Life” by Livia Llewellyn
“The Anchoress” by Lynda E. Rucker
“Siūlais ir Kraujo ir Kaulų (Of Thread and Blood and Bone)” by Damien Angelica Walters
“Gravity Wave” by Nadia Bulkin
“The Veils of Sanctuary” by Selena Chambers
“The Sisters of Epione” by Alison Littlewood
“Red Words” by Gemma Files

For pre-orders and availability, visit your local bookstore, library, or watch for it on sites like DriveThruFiction.com.