A New Alchemical Addition to a Rare Auction

Today I am happy to share with you that I have finished my preparations to ensure a mysterious book called the Mythica d’Argent(1) will be included in book filled with similar listings for other, enigmatic tomes of the occult.

This new book, called The Dagon Collection, will be a follow-up to The Starry Wisdom Library edited by Nate Pedersen.

More news will be forthcoming!

(1) Mark this as a momentous occasion, for reasons I’ll get into later.

More on Upside Down: Inverted Tropes in Storytelling 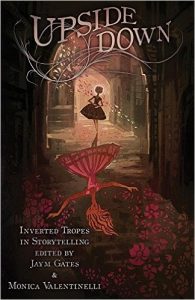 Upside Down: Inverted Tropes in Storytelling features several authors and essayists, including Maurice Broaddus, Nisi Shawl, and Victor Raymond who are all in town for WisCon 41 this weekend. I thought this would be a perfect time to bring up this collection of short stories and essays again, and post the full Table of Contents for the X-page book. You may recall that I wrote about the anthology for Scalzi’s The Big Idea, and that the concept for the collection came from some serious discussions about tropes and cliches.

Challenging what we think about tropes and cliches can be both fun and uncomfortable, and that has shown in the reviews, like the starred review of Upside Down we received from Publisher’s Weekly. I quote: “When the stories are shocking, they demonstrate how thoroughly these narrative conventions have become embedded in our psyches.” This, by itself, was one of the reasons why I wanted to put together this collection.

I know I’m a smart-ass, but I try to operate from the mindset that I don’t know everything, that I am always learning, to prevent cynicism and bitterness from taking over. Editing Upside Down: Inverted Tropes in Storytelling taught me that my lessons in life will never be over, and that isn’t something to fear–but to celebrate. Everyone has a story to tell, and sometimes the best thing we can do as writers and readers is to truly listen to that tale to understand our differences and what we have in common with one another. I’m very proud of the collection, and am so pleased to have worked with such fine and excellent individuals.

If you’re interested in this collection, the anthology is available in digital and print wherever books are sold. You can find Upside Down: Inverted Tropes in Storytelling on Amazon.com, DriveThruFiction.com, and many other bookstores, too!

SECTION I: INVERTING THE TROPE 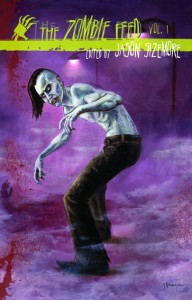 “Tomorrow’s Precious Lambs” is an interesting zombie story for me, because it represented a lot of “first’s”. It was the focus of my first reading, it generated requests for a sequel, I wrote a gospel song while writing it, and it was also my first reprint in Extreme Zombies, too!

Published by Apex Book Company, you can find “Tomorrow’s Precious Lambs” in The Zombie Feed, Vol. 1, which is the original collection filled with stories by Lucien Soulban, Maggie Slater, Simon McCaffrey and more! Extreme Zombies is also available through Prime Books and features really awesome writers like George R.R. Martin, Nancy A. Collins, and Joe R. Lansdale. Both collections are available on Amazon.com, Barnes and Noble, and wherever books are sold.

Here’s a bite of the story! Enjoy the braaaaaaaiiiiiiiinnnnnnnssssssss…

Go on down. Down to the ri-ver. Go on down and wash a-way.

One-thirty. Dog tired. Got a call from headquarters. Had to exterminate a nest out by a gas station. Was worried I was going to run out of ammo. Pause. Rewind. That’s right. I didn’t need to re-load. Long battery life. Couldn’t use the stick like I wanted. There were too many of ’em and not enough of me. So I introduced them to my best friend and mortal enemy–C4. Crickle-crackle snap, snap, snap. Orange flames licked the corpses, ate their rotting flesh right down to the bone. Smelled like my momma’s church picnic. Hungry. Nothing to eat. Found an energy shot. Slammed two of them. Made my belly hurt even more.

Come to the ri-ver. Wash, wash, wash your sins and pray.

Fell asleep at the wheel. Phone woke me up. Three a.m. Witching hour. Sergeant’s on the line saying something about domestic abuse. Tell her it could wait ’til daylight. Man beats a woman down, that’s bad. Man eats a woman’s brain? That’s the guy I’m coming for.

“Officer Mike….” Sergeant’s got that disapproving tone in her voice, like she’s my mother. My momma was a preacher, but she died in a fire, along with the rest of the parish. Don’t know much about Sarge or how she survived. Then I remember. She sticks to the rules, because it’s all she’s got. It’s like her feelings dried up and they were replaced with a pile of useless laws. Like my appendix. Don’t know what I need it for, but it’s still there.

“We got a biter.” Fuck. “She’s twelve.” Double fuck. I’ve been on this job too long, but not long enough. Three years. Shitty pay. Crappy benefits. Divorced. No kids. That was before the dead rose up out of their graves. Some folk thought it was the Rapture, welcomed the dearly departed back into church with open arms. Then the dead took over, gnawing on people like they were Thanksgiving leftovers. Told myself this had nothing to do with God or Jesus or the devil. This reeked of greed, something man-made, and it was up to me to find out who’s responsible.

Suffering of the Unchosen Story Excerpt and Notes 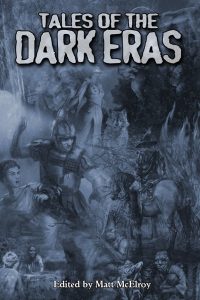 “Suffering of the Unchosen” was a short story I wrote for Tales of the Dark Eras to highlight my take on the Salem Witch Trials for Hunter: The Vigil in Dark Eras. In Doubting Souls (1690-1695), I set the stage for a setting in which monster-hunting players have trouble figuring out who the real monster is. This story is representative of one take on Doubting Souls; that era has a considerable amount of setting information in and around Salem Town and Salem Village following months of research. Some of the resources I pulled from are also listed at the end of that chapter as well.

My story ties into that theme by presenting a main character, a grieving widower and father, who wants nothing more than to exact justice on the hunters who murdered his family. Whether or not his anger is justified is something you’ll have to find out should you read the entire tale.

For now, though, I hope you enjoy this excerpt from “Suffering of the Unchosen”.

Suffering of the Unchosen

I was but a simple farmer whose tender son once planted seeds in barren, rocky soil, whose sweet wife once gathered berries, herbs, and mushrooms in the forest, whose family once led a trouble-free life surrounded by our cousins and neighbors in Salem Village.

Now, that life — the life of William Mansforth — is over. Though it is by some miracle I still draw breath, the rest of my family was tragically murdered a few nights ago.

I found their smoldering remains after I had returned home, battered and bruised, for I had been robbed by petty thieves earlier that day. Upon witnessing the horrible sight of my wife and child blackened beyond all recognition, I sank to my knees in despair, for everything I owned and loved had been ripped from me in a mere day’s time. My purse had been stolen, my cabin and tiny plot of land had been sanctified by fire, and my wife and son had been tied to the stake and burnt alive.

In truth, I had not the eyes to see the pyre for what it was — a ruse — for I was preoccupied with guilt. What could I have done to save them? My beloved wife, Mary, and my adopted son of five years, William, were unjustly murdered and judged as witches for all to see. They were no devil-worshippers! Questions plagued me; each was a pox upon my mind. If I stayed the night, would their murderers return and end me, too? Would I know the faces of the townsfolk who took two innocent lives? Or, was this the Devil’s Hand at work?

With an aching heart, I slept at the foot of that grisly sight, whispering prayers for their wayward souls, so that the spirits of my wife and son would not lose themselves in sorrow. Our cabin’s logs heaped upon the pyre still burned slow and hot; their orange embers provided warmth and kept the cold dew from settling on my skin. There I slept on the hard ground, inhaling and holding the dwindling smoke of that wretched fire in my lungs, begging for death. Who could have done such a thing? Who dared to commit murder and walk free?

At my wit’s end, I could no longer feign sleep. Instead, I sat up, pulled out my hunting knife, and sliced my open palm. I was careful not to wince as I did so; the pain was sharp, but lingering. It reminded me that whilst my wife and son were dead I was, by God’s miraculous Hand, still alive. So in this fevered state, I forged a pact with Him in my own blood, to shine His light into the darkest recesses of men’s most murderous hearts, to ensure my family’s killers were justly judged — even if their capture would come at the cost of my own life.

“Mary?” I knew not if her voice was inside my head, or if it was calling to me from between the trees. I yearned for her and hoped her ghost was a divine messenger. I shouted into the open air: “I am frightened, Mary. Is that you?”

I did as the voice bade, and saw a vision of Mary made whole, standing in front of the tree where we first met. Her naked body was shrouded in fine translucent robes, her long golden-brown hair flowed wild and free, and her kind brown eyes were just as merry as I remembered. She stood apart from me at a distance, but near enough so I could tell she was not a figment of my imagination.

“I am sorry, Mary. I was robbed, wife. Beaten and robbed!” I tried to beg her forgiveness, but my tongue was stuck. “Had I gotten home sooner…”

“William, you must listen carefully to me now. I have naught but a few moments, and I must tell you a secret…”

I fell into a fever-dream, half-drunk at the sight of her, wondering if I had finally gone mad. Was her spirit Heaven-sent or Devil-born? For precious few moments, I wondered if my wife truly was a witch. Then her words stuck to me like thistles, and they held fast.

“…three innocent babes, stuffed with herbs and dressed in linen, buried beneath the church by my late husband. I was the only one alive who witnessed were they were buried…and who killed them…”

“Who did this to you, Mary?” My voice was raspy, and I struggled to speak. I had to know. “Who slaughtered you and our dear boy for the sake of this knowledge? Who?”

“They call themselves hunters.”

Tales of the Dark Eras is now available now on DriveThruFiction.com. Each story in this collection tackles a different historical era, and offers a look into vampires, changelings, werewolves and more featured in the Chronicles of Darkness game line. Watch for upcoming news about additional platforms! 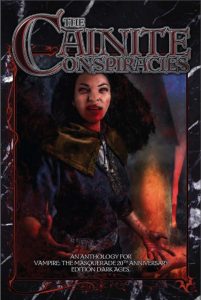 In celebration of this release, three of our authors wrote about their stories. You can read about “Family is Family” by Renee Ritchie, “Sand and Dust” by Andrew Peregrine, and “A Quest for Blood” by Russell Zimmerman.

I hope you enjoy this collection. I had a lot of fun putting The Cainite Conspiracies together!