I am pleased to announce that sub-Q magazine has released an environmental-themed issue filled with interviews and interactive fiction games from Ken Liu, myself, and many other fine authors! I encourage you to play all the games in the issue and enjoy these lush stories. Also: many, many thanks to Stewart C. Baker for his editorial eye and technical assistance. I’m so happy with how this issue turned out!

My contribution to February 2020’s issue is called “Underwater Memories”. This interactive fiction game is best played with headphones in a quiet space. I created a selection of soundscapes for the game by remixing samples released through Creative Commons. (Proper attribution is linked on the title page.) I wish I had time to record my own, but it was a: “Oh hey, wouldn’t it be cool if…” ad hoc desire which Stewart graciously helped me fulfill. Hence, any tips will go toward a new sound system. I have a keyboard and Audacity, but recording equipment isn’t something I planned for. I’d really love to release my own album at some point.

Please enjoy this first song as a sample of what you’ll hear during your experience. The issue is accessible to subscribers now, but will be available after the 15th. I’ll shoot you a reminder about that, but I do hope you consider supporting sub-Q and getting access to their wonderful suite of content.

It’s (Winter) Not Over Yet and Productivity Reflections 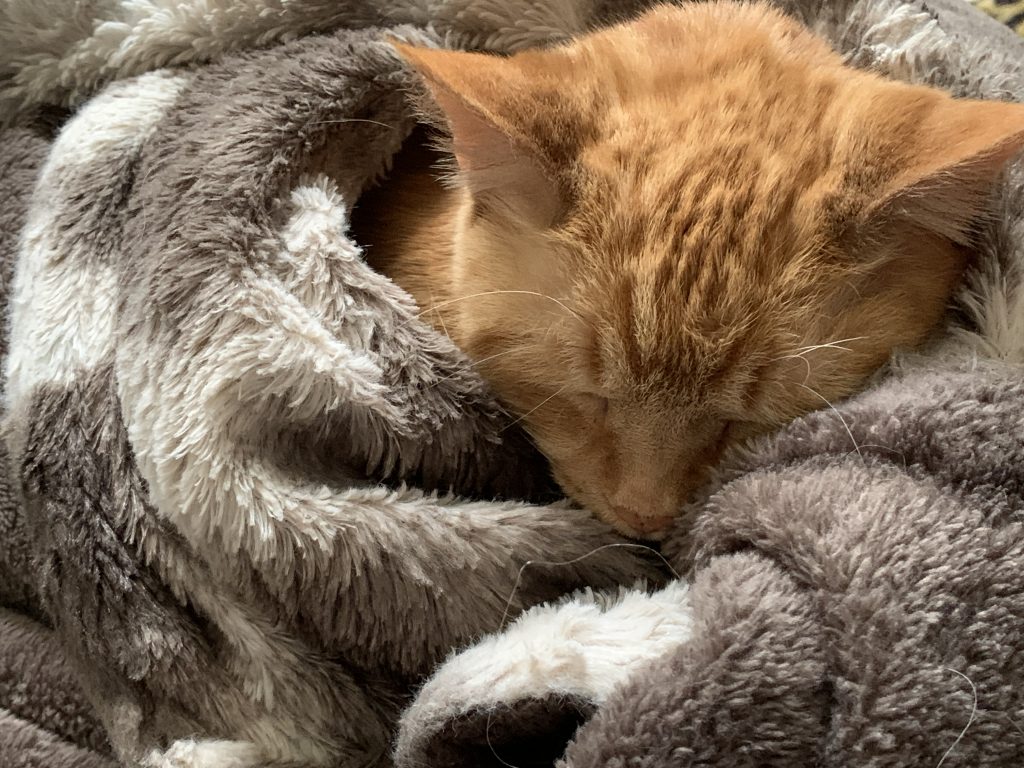 Now is the winter of my discontent for it is cold and white and terribly unpleasing. I enjoy the seasons, when we have four of them, but the spring and fall months seem to get shorter every year due to climate change. Last year, we had an eternal winter, a polar vortex so cold hell froze over, and about two weeks of spring before the temperatures climbed. I’m looking forward to more light in the day in any case.

Winter also brings a fresh round of To Do lists and goals I want to achieve, the type that are within my control and power to control. With the focus on productivity, however, an old and malformed tree has begun to bloom, for this tree–call it Work–is tied to how I view myself in my darkest moments. Its blossoms of self-doubt attract birds that cry: “Are you doing enough?” It’s the “enough” part that’s the challenge for me, because every time I open a new project I feel like I’m at the beginning and I’m starting over again and again. It doesn’t matter where I’ve been, for that’s behind me. My destination is the only thing that does.

Unfortunately, that type of thinking leads to toxicity for one very simple reason: None of us are machines. We are human beings. Life happens! Most people I know are doing the best they can. As I’ve mentioned several times before, Americans aren’t great at talking about failure and loss until we’re on the other side of it. Whether that’s out of fear because we’re deemed unlucky or not, failure and loss are part of our journeys. We desperately need discussions about them because they help people figure out ways to cope. Most people don’t just climb the proverbial career ladder in one trip. Some people don’t want to climb the ladder. Some get climbed over or pushed down. Sometimes the rung is broken. That doesn’t mean that the person who reaches the top was smarter, faster, better–and yet, the social zeitgeist favors “a” story. Someone had a dream, they worked their ass off, and they became wildly successful. It’s the work, you see, that made them what they are. If you just work hard enough, you’ll get there.

This, too, is incredibly toxic because it implies that every dream is possible provided you apply enough effort. What’s wrong with that? The emphasis on “you”. That it’s your fault if you don’t succeed because there’s something wrong or broken or different about you. You get sick, someone dies, your company shuts down, your rent goes up, you get into a car accident–none of which are your fault. Your identity and the things that happen to you don’t acknowledge the big picture; they don’t recognizing systems of power that impact you, too. You didn’t get the job. Okay, that sucks. Why? You didn’t get the job because that position went to the manager’s nephew, instead. All of a sudden, when you start recognizing that pattern or the details, you notice just how much is out of your control. That’s why the myth of personal responsibility in a society filled with millions of people can and does negatively impact us from time to time. If only I didn’t… If only I weren’t so… If only I… Sometimes, you could do all the right things and nothing works out; that doesn’t make you a failure.

So what’s the solution to dealing with those conceits? Besides not listening? I think that’s different for everyone. Our coping mechanisms evolve as we grow and change, too. My solution is to re-frame what I’m doing as a marathon. Right now, I’m tracking my tasks instead of time or word count. Every time I do something related to my personal goals I write that item down in a journal. Over time, I’m building up a log of all those little things I’m doing for myself. Those tasks are written down and dated so I remember in those uncomfortable moments that yes, I am making progress.

If you’re reading this and struggling right now, please know you’re not alone. I don’t know you or your situation, of course! However, if you’re feeling bad because you’re not doing enough? Maybe, you are.

Mark the Date! Take My Intro to Game Writing Class

Hiya, do you love playing games? Ever want to write your own or for someone else? In this class, join industry veteran Monica Valentinelli for insight on how to write your own game or for your favorite type of game. Monica has worked on mobile games, IF games, card games, tabletop games, and more! Questions welcome!

I will be a guest instructor at Cat Rambo’s Academy for Wayward Writers on Saturday, March 28th. To sign up for the class, visit: Intro to Game Writing. The class fee and sign-up details for the two-hour workshop will be on that page. Materials will be provided, but if you have questions about working in the industry? Please bring them.

Don’t forget to check out the other classes that are now available!

I am pleased to announce that we’ve been working on the Hunter: The Vigil Second Edition Kickstarter. When I talk about the game on Twitter, Facebook, and Instagram, I’ll be using the hashtags #htv2e and #ttrpg. Hunter: The Vigil is a modern horror game where you–YES, YOU!–secretly hunt monsters with your friends. It’s a fan favorite and beloved Chronicles of Darkness tabletop RPG that has so much lore! To celebrate this new game, I’ve reached out to my team and asked them for interviews which will be posted on FlamesRising.com.

Here on my blog, I’ll be announcing when the Kickstarter goes live, when we’ve achieved funding, and when it has ended. I’ll sneak in some links to those interviews I mentioned pending their publication as well. If you want to ask me about the game, the best place to do that will be in the Kickstarter itself.

There will be other posts I offer during that time, too, and I anticipate a few more announcements in the coming weeks. If Hunter is not your jam, totally understand. I hope you do find a game or [insert fandom you love] and have a blast with it!

Gratitude Writing Exercise and a Casserole Recipe to Save Time

Heya! I want to blog a bit more. As I mentioned in my newsletter, I have NO idea what that means or what form that will take, in part because all of my sage advice can be summed up thusly: Do what works for you. I trust you will figure it out. If you don’t know what works for you, experiment to find those results. (I write this with no irony whatsoever… None at all…) It is the way. There may be a lot of discussion about the “right” way to make art, but there isn’t one singular process that works for everyone.

Today, as I embark on a new manuscript, I am reminded why I did not start this particular story before. Two reasons. First, I wasn’t ready to. And second? I have no idea what is going to happen after it’s done. I don’t mean this in a “Oh, that’s just how the business works!” sort of a way. I mean there’s a good possibility it might not find a home and it shall gather dust on a shelf and be forgotten. Or, the exact opposite could happen. It’s a crap shoot. Experienced novelists used to writing for themselves will likely read this and know exactly where I am right now with respect to my personal storytelling. I’ve been here before, multiple times, but never like this. This story requires the kind of trust I didn’t have before. The faith that this story needs to be told even if it’s never read by another living soul.

I have what I need now, because eventually I figured out I had to make peace with the unknown. My current status allows me to carve time out of my day to work on something for myself and it’s uncomfortable as f***. TRUTH BOMB!

To help me remain focused, my friend Shveta Thakrar has a wonderful writing exercise we use to ground ourselves before writing.

Simply, list five things you’re grateful for. It’s quick and takes far less time than an A-to-Z gratitude exercise would. Having those five things in writing really crystallizes things you’re happy about and it does help when venturing off into the unknown.

Winter is a great time to make casseroles. They are also good for another reason–they help carve out time so you can write. The prep for this mega-Midwestern casserole takes about ten minutes. You can make this for breakfast or have it for dinner.

Preheat the oven to 350 degrees. Mix the ham, sour cream, cheddar, and chiles together in a bowl. Spray nonstick cooking oil in a 9 x 13 pan. Spread the potatoes down first in a layer. Then, take your goop (that’s a professional term, by the way) and spread the mixture evenly across the potatoes.

Bake the casserole for thirty minutes uncovered on the middle rack. Remove, then spread the fried onions across the top. Place back in the oven for twenty minutes.