Spinning a RED Tale–Cyberpunk RED, That Is

And I’m lucky to be one of the writers.

I’m writing two adventures that can be run as stand-alone scenarios, but also as connected stories. My pitch has already been approved and now I’m working on the outline and first drafts shortly after.

I know this Cyberpunk RED story and the worldbuilding elements I designed. It is the kind of adventure that will force you to make hard choices, give you the opportunity to experience a couple of different “Night City” slices, and–with any luck–be emotionally compelling for you as a Cyberpunk RED fan. 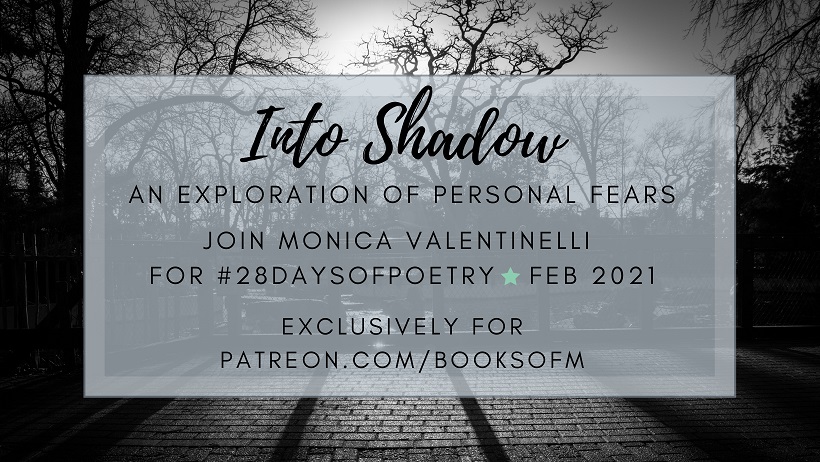 In my newsletter recently, I described how my nightmares and anxiety caused by the violence in our nation’s capital affected my ability to write last week. I announced in that update I’m channeling these emotions to explore my fears in February. I’ll be writing a poem a day for a #28DaysofPoetry challenge.

This month-long project will be offered to my patreons through Patreon for $2. Yep, that’s right. $2 for 28 poems about my personal fears.

Why charge so little? Since launching my Patreon, I don’t feel I’ve done a very good job helping patrons feel vested in my work. Last year, my patrons helped fund a new web cam–something I desperately needed during the pandemic and am hugely grateful for. I’m hoping that the $2 price will help reassure patrons that their financial support is greatly valued.

In terms of “What am I going to do with this?” The answer is: “I don’t know.” This idea is new, raw, and will be a journey. It’s been a long, long time since I’ve written or studied poetry, and I’m not sure if any publishers would be interested in this type of collection. What’s more, now that I’ve been practicing mini-art pieces for #makedontbreak, my creative mind might shift to illustrating these too. I just don’t know.

I hope you’ll consider joining this project. If you are already a patron, please accept my enduring gratitude. I look forward to sharing my fears with you.

A short progress report this week!

I recently watched The Alienist and that series touches upon some of the issues I mentioned previously with respect to the historical treatment of Italian-Americans. (We’re now watching Doom Patrol. It’s VERY different!) Also: I miss sitting at a coffee shop to write. I stumbled across Coffitivity.com which gives me the benefit of “sounding” like I’m sitting there. Huzzah! I’m also slowly taking Italian again, and that’s been super fun.

Yep, it’s Thursday and I’m still noodling over how I want to retell “Liombruno.” It’s a traditional fairy tale that has two components to present a hero who’s worthy of being saved. My gut is telling me to “get weird” and I’m cuing off of the region’s mountains, forests, and streams. I could imagine a villager telling this story while gesturing to a grand palace atop the mountains.

I picked a new short story for week three. It’s called: “The Fine Greenbird” and it’s from Florenza, the capital of the Tuscany region in central Italy. This is a folktale with a strong theme of jealousy; it also resonates with the number three: three sisters, three offspring, three quests, and three judged. One aspect that stood out to me was the outdated belief that women have control over our bodies to determine the sex of a child. Mind you, the children are characters themselves, so I’ll have to mull over how I want to tackle this harmful and antiquated notion after retelling “Liombruno.”

Last time, I gave you some initial thoughts on “Catarina the Wise”. Today I want to dig a little deeper, because there’s something eating away at the heart of my process. Simply, the question: “Should this be a literal retelling, beat for beat, or should I capture the essence of it?”

I thought about the story’s themes related to equality and how they’re presented. The idea that education should be free for everyone, regardless of class, is not the “point” of the tale–but it is a message that is more powerful to a reader in the past than it is today. While the gender equality message is present, I feel it’s specific to cishet marital relationships and the father-daughter bond. It’s for this reason I think the story’s lesson has two different audiences. First, it’s a story about Italian, family-minded cishet men. My take is that fathers and husbands shouldn’t regard their daughters and wives as anything but equal. However, Caterina the Wise also presents as a lesson for the cishet women in these relationships, too. That is: it’s better to bend the existing rules than to try and change them.

I want to point out that Catarina doesn’t interact with other women in the story; her mother passes away off-screen early on. Her worth and value is shared through the perspective of her father and her abusive husband, the prince. When she gets in trouble, she does ask her father for help, which he provides, he then stops helping. I don’t know how much you know about Italian families, but the fact that the father left Catarina to her own devices is a huge deal. Huge.

After re-reading the story, Catarina’s methodology to teach her abuser a life-changing lesson feels wrong to me, because she lies about who she is, sleeps with the Prince, and has several children she then uses as leverage. She doesn’t simply leave him. She stays and changes him by teaching him a lesson–which…well, that’s problematic AF. In this specific instance, the fact that she is not the villain flips the trope that cishet women who use their sexual power are evil. Catarina is not depicted as such. Instead, she’s the heroine of a tale who beat the Prince at his own game.

Here’s where these resonate tones get complicated: I made a pledge to not include cishet white men in my stories to challenge myself. I’ve already decided I’m not going to simply flip the genders because that’s the easy way out for me; I don’t know enough about the power dynamics in queer relationships to write them well and provide the necessary, authentic subtext either. Instead, I’m looking at the essence of this story to see if that’s portable to 2020. Then, I’ll build characters around the abuser-victim dynamic who make sense for the story. So far, I’ve been leaning into the heroine’s name–Caterina the Wise–and the lesson of entitlement with respect to class. I don’t believe that lesson requires a sexual relationship (or the use of children as leverage).

Oh! I don’t think I mentioned this before, but the reason why I am not choosing the name ‘Barbara’ from Calvino’s retelling is because of its meaning. Barbara is a Greek name that is the root of the term “barbarian”. I don’t regard Catarina as being the villain in this story, and changing her name to Barbara (strange or foreign) from the Italian version of Catherine (pure) feels like an odd choice for her character.

Anyway, blogging about “Caterina the Wise” has been interesting for me; I hope you’re enjoying this look into my process. Short stories, in particular, are something I must read a couple of times to fully appreciate, understand, and unlock all their complexities.