Wanted to pop in briefly and mention a couple of sales going on today. Apex Book Company is running a forty percent off sale on their store. Use the discount code GIVE16 at checkout to save on some great books.

Last but not least, something fun! After I cracked a joke about wanting this illustration on Facebook, my friend Charlie Bates illustrated a fairy smacking a troll upside the head with a rainbow and dubbed it the “Rainbow Smackdown”. This illustration is now available via Society 6; you can get a T-shirt or a coffee mug and support an amazing artist. Plus, this is on sale for Cyber Monday, too. Bonus! 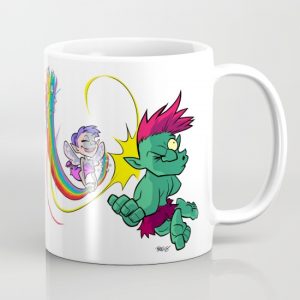 I am having a hard time trying to find meaty non-esoteric Alchemy tomes. I am full up on “light this candle, summon the power of St. Germaine!” I need history books that talk about the different cultures, possibly in the context of early Chemistry, but also tomes that offer some science about reagents and the like.

Biographies of key folks would be good, too, but again… I’m not looking for ways to paint circles on the ground and bring three hundred year old dead guys back to life. Also: I don’t “just” want Western Alchemy. The world is not confined to Europe after all. Early chemists would also apply here, too. Sadly, that part of my brain is missing. Suffer the science lapse…

Recommend Me Books For A Change

It’s no secret that I feel, in order to be well-rounded both as a human being and as a writer, one must read books (and a lot of them). I get a sense and deeper appreciation of culture when I read works set in locations only seen on. . .well, it used to be Encyclopedia Britannica or National Geographic. I suppose it’s now Google Maps?

Anyhoo. My feeling is that there’s always one book that you feel defined “X” for you. For example, it’s no secret I feel American Gods defined urban fantasy. Published in 2001, I feel it was a landmark novel and extraordinarily influential on the genre. For other examples, I feel that Interview with the Vampire by Anne Rice set the stage for paranormal romance and Splinter of the Mind’s Eye by Alan Dean Foster offered an exemplary take on tie-in fiction in a way that influenced other books in the Star Wars extended universe for years to come. Another one comes to mind, Diana Gabaldon’s Outlander series was a powerful one and I feel a shining example of historical romance and time travel. Humor? Hitchhiker’s Guide To The Galaxy, sure, but even before that, anything written by Erma Bombeck.

For modern horror with supernatural elements, there’s a scale of books that begins with the unabridged version of Stephen King’s The Stand, followed by the co-authored Peter Straub/Stephen King The Talisman, and winds up ever-so-neatly with The Great And Secret Show series by Clive Barker. (What’s he up to, now-a-days. Anyone know? And yes, I realize that the trilogy I just mentioned is billed as “fantasy,” but to me, it’ll always be dark fantasy teetering on the fringes of horror.)

For fantasy? Oh, there’s also a scale given how well-read I am in that genre, too. Where to begin? The Death Gate Cycle series by Margaret Weis and Tracy Hickman, The Dragonbone Chair series by Tad Williams, and pretty much anything by Tad, because he writes about characters that are more diverse than the traditional Anglo-Saxon Protestant living in a world where magic exists. (Sorry, folks. . .that’s a button for me. I like diversity in my fiction, especially in fantasy, because my world is diverse. Though, there is a lot to be gleaned from stories where the characters are homogeneous, too.) My list, which goes into never-never land, goes on and on and on.

Because of how I read (and when) no doubt my take on the cultural zeitgeist is a personal one — but there are gaping holes in my library at the moment, reading I lack either because I have no idea where to begin, I’ve forgotten what I had read, or because I fallen out of reading experimentation due to laziness and default to whatever’s lurking about on my shelves. Mind you, my walls are quite literally bleeding books, so this isn’t necessarily a bad thing. And reading experimentation, my friends, is what this post is all about.

Today, I am asking for your recommendations on a single tome, a work of fiction, that YOU feel is the best indicative of one of the following categories, cultures, professions, genres, etc. It does not have to be a best-seller or a modern work, mind you. It just has to mean something profound to you and available via Ye Olde Library. Now that I think about it, try to limit works published since the 1950s, unless I noted the word “literature.”