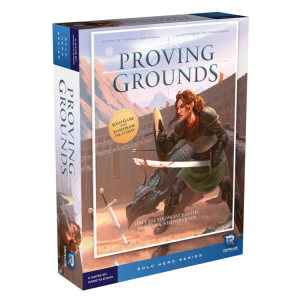 Maia Strongheart stands alone against the world. A cabal of conspirators has framed her for the death of her own mother, the Sun Queen, and they intend to usurp the throne from her family. To prove her own innocence and reclaim her birthright, Maia must step into the Proving Grounds to complete a trial that will stretch her combat skills to the limit. Will the Wizened’s chosen daughter vanquish her foes in the arena? Or will she be overwhelmed by the conspirators and their evil aspirations?

If you’ve never played a solo game before, this is a great place to start. There is a training game and six different gameplay modules. Once you’ve learned the basics, add a single module or mix and match to your tastes. If you’re feeling truly adventurous, put them all together for a true test of your gladiatorial combat skills!

Proving Grounds is a unique title that’ll be released this Spring from Renegade Game Studios. The release is a solo card game plus novella! I designed the fantasy world and wrote the novella titled: “Only the Strongest Has the Heart of a Wizened Queen”.

You can pre-order Proving Grounds now from the Renegade Games store. Exciting!

Writing Notes for Tales of the Seven Dogs Novella

I’m happy to report that Flames Rising featured a preview of Tales of the Seven Dogs Society, my soon-to-be-released novella that I’ll be selling in less than two weeks at GenCon: Indy.

In 1969, Jericho Usher disappeared without a trace, never explaining the otherworldly nature of the annex. Jericho Usher spent his lifetime investigating anomalous phenomena, and it was his intention that others take up his work once he was gone. To facilitate this, Jericho left behind very detailed instructions for assembling a society of investigators. Terrance honored his friend’s intent, overseeing the creation of the Seven Dogs Society, recruiting those who fit the exacting instructions left behind by Jericho Usher.

You may remember that I had written a series of posts about writing game fiction; this post focuses on a behind-the-scenes look at my novella.

One of the advantages to writing fiction for the Aletheia setting, is that I had written for the game. Since I was already familiar with the role of the characters, it was a lot easier to imagine what kind of a story I was going to write. Instead of writing an action/adventure tale, I chose to write a story that alluded to the game’s metaplot.
END_OF_DOCUMENT_TOKEN_TO_BE_REPLACED

What’s in a Licensed Setting? Covering the Details When Writing a Book

Wrapped up my novella work last week for the licensed setting based on the game Aletheia. In this world, there were characters with psychic powers, mysterious villains, and a highly detailed setting–a sprawling, remodeled Victorian mansion called Hepta Sophistai in the town of Seven Dogs, Alaska. Inside the house, there were portals within the house that opened up to other parts of the world in unique environments, a long list of signature characters, a solid history of events as well as a general sense of what the possible future might be.

What I just described is not uncommon to any licensed setting. Ensuring that your story’s details match what’s in the setting can be exhausting, painstaking, almost data-driven work that can suck the creativity right out of you. My particular style of writing is more of a weave where I often take small details and mention them throughout the story, to provide a more subtle backdrop. It is extremely easy to fall into the trap where you spend more time describing the setting than providing an actual story because as a writer, you have two goals. One goal is to ensure that you are appropriately translating someone’s intellectual property (IP) and the other is to tell a story.

I resolved the technical details of the setting I was writing for by focusing on plot first. What story did I want to write? What kind of characters would I want to develop? From there, I first mapped the character details, to make sure they fit the setting, and then focused on the world-“deconstructing.” In my case, this was especially useful because I chose to write in the first person so that their voice reflected the world around them.

As a side note, I should mention that first person gives you a bit more flexibility when you’re working with a licensed setting because, as a character, the point-of-view (POV) by default is through one person’s eyes. One character’s POV is limited because of what they see so the emphasis is more on “thoughts” or “feelings” of that character. On the flip side, a reader’s expectations of a third person narrator may require more setting details because of the narrator’s omniscience.

I feel that many of my setting limitations were self-imposed, even though this is not a common or mainstream property, because of the way that I view IP. Within any licensed setting, there may be any number of signature or iconic elements that readers and fans glom on to; with the amount of dedicated fans out there, I feel that even if one IP isn’t as popular as another, there still may be that one fan out there who doesn’t want it screwed up. (Or the publisher for that matter).

If you were to write a story about Superman, you’d have a lot of flexibility within the boundaries of the IP to make your story ring true like the big man in blue. Writing a story about Riddick, on the other hand, may not be that easy because the elements that surround this dark hero (of sorts) need to somehow tie back into Riddick in a believable way that isn’t formulaic. An interesting challenge, in my opinion, in a setting that I feel hasn’t been explored all that much. Sometimes, just because you have more creative flexibility doesn’t necessarily make a project less difficult.

Of course, you aren’t the only person responsible for how well your story matches a licensed setting. There are layers of editors and other folk who do a lot of work to ensure that a story fits. In my experience, it’s part of being a professional to try to fit within the confines of what you’ve been assigned to regardless of what you’re doing. The easier you are to work with, the more work you’ll get.

By prioritizing your project into a plot-character-setting format, you will be able to save yourself some headaches in the long run and provide an entertaining story for the reader. It may sound cliche, but it more cases than I can count, story should come first.

Novella Update: Into the Home Stretch

This week has had its ups and downs. Let’s just say that I’m eternally grateful to all the wonderful people I work with, my readers, my SO, my friends, and my two cats Rimmon and Zak (aka Fuzzballs of Doom) for putting up with me.

Chocolate, bagels, coffee, and beer for everyone!

I updated my fiction release pages to cover off a little bit about what the novella will entail. In terms of writing, this particular story had the most setting details available out of any project I’ve ever done. I literally had the eBook open and cross-referenced everything to be in line with the corebook.

The story is about two twins named Ralph and Edgar Whitman; their names were inspired by authors Ralph Waldo Emerson, Edgar Allen Poe and Walt Whitman. Ralph and Edgar share an ability called “Presque Vu,” but interpret its usefulness, the philosophy behind it, and what it means differently. Presque Vu is the ability to see if an event if part of the Grand Design, that flash you get when you know something is happening for a reason.

Once I get permission from the publisher, I’ll post a sample. It’s written in two parts, from each of the brothers’ points-of-view. The story is a mystery, delving into ghosts, crop circles, mysterious bad guys, cryptic writings and much more!

Now, off to the home stretch were I plan on getting to bed early. Hope everyone’s doing really well!