In June, I had attended the training for Google Analytics through my previous employer. This two day training, hosted by ROI Revolution featured everything from how to set up Google Analytics to track pay-per-click (PPC) advertising to funnels and eCommerce data. I’ve been a big fan of watching the trends of web analytics for a while now, following web analytics gurus like Avinash Kaushik and Matt Bailey from SiteLogic when I can.

On Wednesday, Google announced that they are offering a more comprehensive way to get help customizing Google Analytics code. Decoding Google Analytics talks about how users want more “fine-grained control” over their analytics package, and points to this series of Google Analytics documents on Google Code to help GA users meet their needs.

Get Help on Migrating from urchin.js to the “New” Javascript-based GA Code

One of the needs Google is referring to is to help users migrate from the old Google Analytics code (urchin.js) to the new GA code (ga.js). While there is the possibility that some of your historic data may be lost during this process, keep in mind that there is also a difference in the way that the two codes function. Additionally, Google will not support the Urchin Code (also known as the legacy code) indefinitely, so it might be a good idea to set up a “sandbox” (i.e. another GA profile) and migrate your code into a test environment sooner rather than later.

In January, ROI Revolution asked, Should you join the Migration? The article cites that Google would only support the legacy GA code for approximately 12 to 18 months. In our June training, they had indicated in the training that Google would potentially phase out support for the urchin.js code as early as late fall.

If you’re a site or a blog that experiences more traffic during the holidays, you may want to consider double-checking your Google Analytics code and reading up on the Google Code documentation. Once seasonality comes into play, it can be increasingly difficult to troubleshoot nuances or trends in Google Analytics’ reporting, because there is an additional layer of traffic to sift through that isn’t there typically.

Without the ability for Google to support the urchin.js code, it’s still pretty unclear to me how that might affect legacy users who have years worth of data in their account. The idea, though, is pretty daunting nonetheless and I encourage you to post if you have insight to share.

I’d also like to point out that I highly recommend downloading the main reports on a monthly basis to a pdf format, even though you’re only able to download the first 500 rows of data. Since the backup for your Google Analytics package is off-site, you don’t have control over the “back end” of your data and you’re relying on Google for precision and data backups. Having a pdf download of month-to-month overviews can offer you a little sanity and a way to ensure that the data you’re using is relative and accurate in your reports.

Like pulp? How about horror? Superheroes? Awesome. I bet that many of you who are reading my blog have had great ideas for stories or games based on a popular genre. With fiction, you probably already write using techniques to affect the pacing, mood and feel of your story to induce that air of mystery or feeling of awe. Shorter dialogue, use of fragments and punctuation can enhance the reader’s expectations for a story. Couple that with stunning visual descriptions and you have the makings of a spectacularly paced genre fiction story.

But what about games?

Writing games based on a particular genre is a bit trickier because the people playing the game have the ability to create their own mood based on the product you are creating. Unlike fiction where the environment is more controlled, a game’s environment can’t be controlled. Or can it?
END_OF_DOCUMENT_TOKEN_TO_BE_REPLACED

I’ve run into many writers recently who are under the impression that online publishing is the same thing as print publishing. You publish on the web — no one else would “dare” pick up your article or content — and readers will flock to your article or blog post because of your reputation as a writer.

Here’s a list of my top five writer’s misconceptions about online publishing:
END_OF_DOCUMENT_TOKEN_TO_BE_REPLACED

How CNN made me Laugh with Bad Headline Placement

Whether you’re a Democrat, Republican or Independent, I had a little chuckle at this headline placement on CNN.com. Sure, CNN.com probably didn’t “plan” to have the headlines show up in that particular order, but it just goes to show you why bland, keyword-rich headlines are not only better for SEO — they’re better for readability and can prevent some interesting headline combinations. This CNET article entitled, “Newspapers search for Web headline magic” is a great one, and goes on to say that keyword-rich headlines make it easier for other writers to find the articles already written, to avoid duplicate efforts.

Of course, I’m sure CNN.com didn’t mean to put “Palin Comes out Throwing Punches” “Just Say it, Please” “Go Ahead and Puke” together, but it made me laugh anyway. 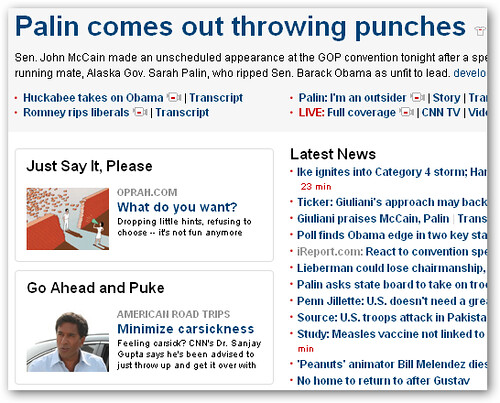 I first heard about young adult author Stephenie Meyer in Barnes and Noble; admittedly the classy photographed covers drew my attention. Then I noticed the gold seal, describing the upcoming movie “Twilight.” Admittedly, I don’t typically like a lot of romance with my vampires or overinflated female stereotypes but, as a fan of Angel and Buffy: the Vampire Slayer, I can understand the appeal and its nice to see another female author enjoying success.

With a little bit of internet research, I watched as this Mormon-turned-paranormal romance author embraced her online fans, asking them to squelch spoilers before they start. Then read about how sections of the new book, Midnight Sun, were leaked on the internet before the book was published. How did I find out about this? Twitter. Someone had posted a link to Stephenie Meyer’s letter and their fan response.
END_OF_DOCUMENT_TOKEN_TO_BE_REPLACED