MANW Week 17: A Reminder to Be Gentle 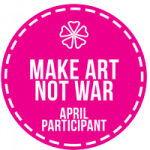 Gentle is a word that is often misassociated with weakness and with hyper-femininity. Only, gentle is a word that should hold great importance, but is often overlooked because it is viewed to be antithetical to strength. Gentle is the word I need when I cannot muster up the will to make art, when I don’t make a deadline, when life throws me a curveball and I feel like I’ve messed up. Gentle relates to healing, relaxation, soothing waters, and gentle breezes. And yet, often it’s dismissed out of hand and painted as laughable or inconsequential or full of childlike naivete.

I learned to be someone who downplayed the need for gentleness, and had to unlearn it. Yes, some of that is due to the echoes of a past that grow quieter with each passing year. But, some of that is also because I’ve trained myself to handle failure by being pragmatic to avoid succumbing to my emotions. Then, April happened. I set achievable goals, traveled, painted, wrote, and blew up the internet. What I didn’t (and could not) prepare for, was the toll this situation took on my psyche and general well-being. I did, absolutely, miss a few things and I still feel terrible that happened. I asked myself why I allowed myself to slip up; didn’t I know any better; hadn’t I been through far worse. All the while, pushing myself harder to get back on my feet and into a regular routine.

In the process of cleaning up my proverbial mess, I did three things that were outside of my normal routine: I did not engage in retail therapy, I used my Make Art Not War 2017 time to critique/sub original short stories again, and I started walking regularly again. By doing so, I naturally stopped chiding myself because those small movements represented progress and gave me something to look forward to. Gentleness, in other words, led to another emotion I’m not used to having: hope. Mind you, I couldn’t have picked myself up without knowing there were supportive people out there well beyond the friends and peers I already knew. But, lesson learned. I realized that the ability to fall, to be gentle with yourself after you go through something awful, is not something we’re taught to handle well as artists. It is, however, part of learning how to be resilient. Even so, there’s a certain amount of privilege that comes from knowing and having the ability to fall within a safe space. A lack of safety net or support system dramatically impacts your psyche–especially if there’s financial concerns involved.

When I designed Make Art Not War 2017, I didn’t think about safety nets because I have a small, but stable one and it never occurred to me that it’d be needed. I had been working on rebuilding my local community with varying degrees of success, and I felt anything I could provide would not be helpful since my footprint can’t reach into your backyard. Instead, I focused my efforts on a program that could help empower and motivate you to produce more art despite all the distractions in the world today. Making art does require time, consistency, and persistence, and I was very conscious of that this month.

In the past, I’ve often said that success is something you have to determine for yourself. Now, I realize that some failures are the same way. Sometimes, you have to be the one to figure out what a setback means for your art or your career–because you’re the only one who can determine what happens next. Do you get back on the proverbial horse and make more art? Do you double down when faced with criticism only to later recognize you made a mistake? Do you need to take a quick break to give yourself relief before diving back into the pile? To address the hardest questions of all, I feel that gentleness is required. At the end of the day, you are human and you will fail from time to time. Failure is natural. It’s what you do with that failure that defines you.

Sometimes, to pick yourself back up a little gentleness is what’s needed the most, and I hope that you will never forget that self-care isn’t something to overlook. It’s what I needed this month, and I hope this post serves both as a reminder and inspiration for you to be kind to yourself as well. Be well.

Mood: Thar be dragons
Caffeinated Beverages Consumed: Half as much as the day before, but not nearly enough as today
Work-Out Minutes Logged Yesterday: Another hour’s worth of walking.
In My Ears: Dragon Age: Inquisition soundtrack
Game Last Played: Pokemon GO. Review forthcoming. Post gym. No, not “a” gym, a Pokemon gym.
Book Last Read: Aurora by Kim Stanley Robinson
Movie/TV Show Last Viewed: Agents of S.H.I.E.L.D.
Latest Artistic Project: Make Art Not War 2017 Challenge and Rules
Latest Releases: In Volo’s Wake for Dungeons & Dragons 5th Edition, Unknown Armies Books 1-3, and Kobold Guide to Gamemastering. Read my end-of-the-year list of releases for an overview of what I’ve put out for 2016.
Current State of Projects: Read my latest project update. New project update coming, uh… when I get caught up.