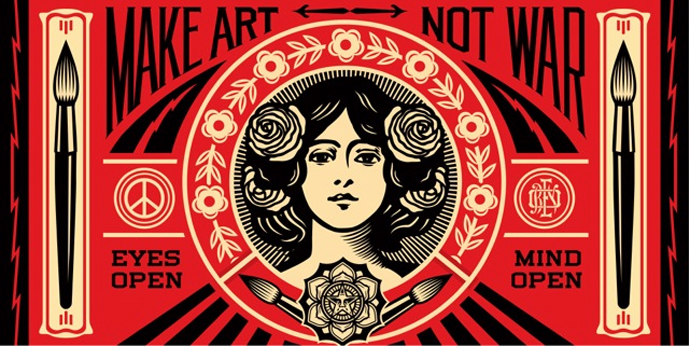 Make Art Not War is a phrase that’s been popularized by street artist Shepard Fairy in a series of murals, like the one pictured above, found in Los Angeles and other parts of California. The phrase is simple. Powerful. The imagery clear. And it is my motto for 2017 for these reasons.

To that end, I’m devoting 2017 to a simple art challenge using a series of mantras and basic guidelines. The one I concocted is Don’t Get Mad, Make Art, and you can read about how I applied that over on Scalzi’s “Whatever” Blog in The Big Idea with Monica Valentinelli. All my frustration, all my rage, all my sorrow and empathy and joy… I want to finish sharpening my sword and engraving it to make a mega-butt ton of my own art in 2017.

Why am I keeping the rules for this simple? Couple of reasons. First, after working full-time as a writer, what I’ve found is that while discipline is crucial to making art, working on my own stuff fell to the wayside. And, I’m going to tell you why that is: money. If I can’t justify spending the time on something, I don’t do it because I can’t see the benefit. Even with Upside Down, which had a great launch, there was a lot of risk involved from the start. What if the collection isn’t received well? What if the slush pile doesn’t yield trope-smashing stories? What if, after pulling so many people together, it doesn’t fund at all? Money isn’t something writers talk about, because there’s still this pervasive idea that either we shouldn’t make it, that we’re asking too much, or that we should suffer for our art.

I don’t want to suffer. (Been there, did that.) I’ve already made decisions and gauge, constantly, how I can make a living doing what I love the most. If I had my choice, I would devote my time to my original work and not work for anybody else–but I can’t. I can’t afford it, and I can’t turn my back on the readers who supported me from the beginning. They came from my media/tie-in efforts, and I’m very grateful and aware of how I’ve grown as a result. Maybe some day I’ll have the power to command publishers and hordes of readers at my beck and call, but being as pragmatic as I am… Well, there aren’t a lot of writers who do and who can. Instead, we have to make it work with the tools and resources we have at our disposal, and I’m using this as a chance to bring my original worlds and stories into the world.

Another reason why I want to create simple guidelines, is because there are a lot of new writers and hobbyists out there who (have told me) are intimidated by any kind of challenge. It’s frustrating for them, because they haven’t internalized how to make the thing they love so they either never start, don’t find the time, or get discouraged. Unfortunately, the only way to learn is by doing. All the great ideas in the world can never manifest unless you shimmy and get out there and make art!

Without further adieu, here are the draft guidelines for my challenge. Comments welcome!

Author’s Note: I will post the manifesto and guidelines next week, so we have time to prepare for January 1, 2017.

What I want to do for the 2017 challenge guidelines, is to cover three areas: time, tracking, and check-in. I don’t want to shape the challenge by telling people “what” to make, though I might toss a few fun bits in throughout the year to inspire y’all. I’m using some of the disciplinary practices I had to do when I used to play piano as a baseline.

1. Daily Practice: Devote one hour a day to making original art. Yes, all 365 days a year! If, barring sickness and what have you, a day is missed it needs to be made up.

2. Weekly Practice: I will post a minimum of two blogs per week. The first will be a check-in to see how both myself and everybody else’s doing. Comments will be open, so you can post links to your websites if you have something new to share. The second, will be about some cool thing I like. In other words, while this challenge is about making my own art, I can still support you (the reader) and my peers. I don’t want to say “I will post metrics, I will post what I’ve done, I will post pictures…” That feels a little too show-y to me, and I think that needs to be more organic than that.

3. And lastly… Social Media Usage: Okay, so originally I thought about taking a year off from social media, but that won’t work. I’ve got a lot of releases coming out, I’ve got fans to chat with, and unfortunately the vast majority of my writerly friends are more introverted than I am. Instead, I want to limit my public engagement for the entire year to no more than twice a week. I’ve got a few private means to keep in contact with friends and whatnot; this is the Twitter/Facebook/whatever stuff.

Thoughts? Am I in the right direction or do I need rethink this?