The Queen of Crows 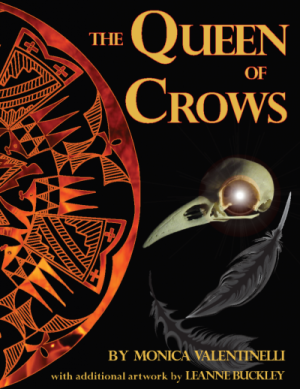 Centered around a short story entitled “The Queen Of Crows,” this unique product was designed by author and game designer Monica Valentinelli. Published early 2010, this is one of the first enhanced e-books to hit digital media. At a retail price of $2.99 for the eBook, readers will receive a magazine-style layout of THE QUEEN OF CROWS, a professional illustration of a character named “Mahochepi” and more!

This product is the first release set in the world of the Violet War. The short story entitled “The Queen of Crows” takes place during the 1860s and was inspired by the historical event called “The Long Walk.” The plot focuses on the tough decisions that a Navajo elder named “Tse” must make to save his people. Will he summon Mahochepi, the Queen of Crows, without knowing who–or what–she is? Read the story and find out!

Here’s what readers can expect to receive when they purchase THE QUEEN OF CROWS:

Watch the promotional trailer for THE QUEEN OF CROWS e-book. Music was composed by James Semple.

For more formats or to request a review copy, please use the contact form.

MONICA VALENTINELLI is a professional author and game designer. Described as a “force of nature” by her peers, Monica is best known for her work in the horror, dark fantasy and dark science fiction genres and has been published through Abstract Nova Press, Eden Studios, White Wolf Publishing, Apex Magazine and others. Her credits include: a short story titled “Pie” in the award-winning Buried Tales of Pinebox, Texas anthology through 12 to Midnight, an original flash fiction piece entitled “Prey,” which placed an honorable mention in a Mirrormask writing competition and “Twin Designs,” a science fiction novella for the Tales of the Seven Dogs Society collection through Abstract Nova Press. For more information about Monica, be sure to browse this website or visit MLV Writes.com.

LEANNE BUCKLEY is a professional illustrator with over ten years of experience under her belt and has worked for both the comics and gaming industries. Her clients have included: Image Comics, Mattel, White Wolf, Paizo, Wizards of the Coast and several others. In addition to her freelance illustrations, she was a Senior Artist for four years at Humanhead Studios, a video game design studio. Her work includes: Put the Book Back on the Shelf: A Belle and Sebastian Anthology through Image Comics, Cthulhutech through Catalyst Game Labs, the Exalted line for White Wolf Publishing, and layout as well as concept work for Mattel. For more information about Leanne and her contact information, visit http://leannebuckley.com.

SHARI HILL is a professional editor, layout artist and writer with over 15 years of experience in non-fiction, gaming, and academic publishing and communications. She is currently a communications coordinator at a private university. As a freelance editor, she contributed to the All Flesh Must Be Eaten line by Eden Studios, and her credits include the Worlds of the Dead setting collection, the Book of Archetypes series and the Eden Studios Presents series. The Queen of Crows features her first credit as a cover artist.

JAMES SEMPLE is a composer for media including TV, video games, websites and films. His latest project was scoring the feature film JEN. He has been playing instruments for around 20 years and currently plays guitar, piano, bass and saxophone. James has a Diploma in Media Composition and specialises in digital orchestrations. James writes in a variety of styles including orchestral, rock, jazz and dance. Examples of these styles can be found in the music section of his website located at www.jamessemple.com.

This site uses Akismet to reduce spam. Learn how your comment data is processed.