My Books of M Author’s Shelf Thus Far and Sticks

This past summer, a reader asked if I had thrown together a shelf of what I’ve worked on. I hadn’t! I did think the suggestion was a great idea, and I’ve managed to pull together some of my publications. This isn’t everything and it doesn’t include any digital-only releases, but it’s a way of highlighting what I’ve done in the past ten years. Anything pre-2005 has been lost, minus precious few of my academic works that, quite frankly, are so terrible I’d rather not show them to the world for a few reasons. There’s a definitive difference between intelligence or IQ, emotional intelligence, and social intelligence. I only had one of the three the first time around, and my incredible ignorance showed in my work.

This exercise helped me do two things: one, have a visual reminder of what I’ve done. Two, help remind me that in order for this shelf to grow, I have to write more. For me, the depth and breadth of my personal value as a writer is measured by what I do next. I can point to each and every publication on this list and tell you how I feel about it–good, bad, or indifferent. Some stories and games I’m immensely proud of; others I’m not. Too, much of this shelf I’ve gotten paid via “work-for-hire”, so the inventory of original stories I own is smaller than the works I’ve done for other properties. That means, if I want to remain viable I need to keep writing and seeking publication. 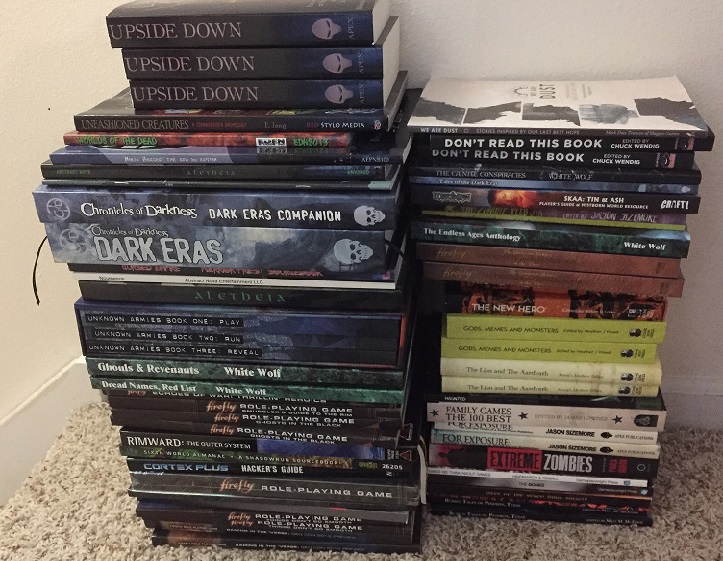 I mentioned before I have a business plan, and my metric for measuring progress does factor into that somewhat. But, more importantly, the “measuring stick” is something I hadn’t given a name to before. My friend, Shlock Mercenary‘s Howard Tayler, had mentioned that bit of insight to me recently. Basically, if you’re an artist you have a stick or some means of measuring your progress. There are 1,000 unknowns which contributes to the need for a stick in the first place, but what that stick represents is unique to different people. Some examples of this include: how many followers you have on social media, being associated with other high status individuals, how many readers you have, what awards you are nominated for/earn, how vocal your fanbase is, how many reviews you have, how many copies you sell, if your work is studied in academia, how much money you make, how many conventions you’re seen and mingle at, how much of your work is original vs. work-for-hire, etc.

Some artists measure others by their “stick”–a thing I did early on and am incredibly ashamed to admit I did. I used to think no one cares about the book you wrote ten years ago, but for some authors? That’s enough. That’s their path. They wrote their story, and they are happy with the outcome. Good for them. Not, “this isn’t valuable because it’s not what I would have done.” And, I’ve since learned that measuring others by what I feel is important can be incredibly short-sighted and downright harmful. Just because someone hasn’t published their novel recently, doesn’t mean they aren’t still writing, that there’s other things going on in their life, or they aren’t valued as a writer and human being.

Having a career as an author is becoming more challenging every day. So, sometimes measuring your own progress against what you’ve done in the past doesn’t work, either, because it doesn’t account for all the things that can and will go wrong just by having a life. Outside of that, too, are the financial considerations and sacrifices necessary to write in the first place. Sometimes, those pieces line up. Other times, they don’t. When they don’t? That’s when bitterness can set in. That’s the danger of a stick. Identifying what that metric is, however, is a neat way of navigating those emotions and I appreciate Howard’s insight so, so much.

For now, I’m going to focus on the positive aspects of my own stick. I need to. If I want to be hopeful about certain possibilities, I must do the work. I haven’t felt that emotion–hope–in a long, long time. It feels great to fall in love with my work, and I know in my heart I cannot control the outcome or its reception. While that keeps me grounded, for the first time in years I am daring to dream. Writing more the only thing I can control, and when all else fails? Putting words into a blank page is the surest way to move forward. Without that, without doing the work, I am not whole.

Anyway, whether you’re just starting out as a writer or you’ve already been established, I definitely recommend having a shelf of your stuff. It’s made a positive impact on me, and I hope it’ll do the same for you.