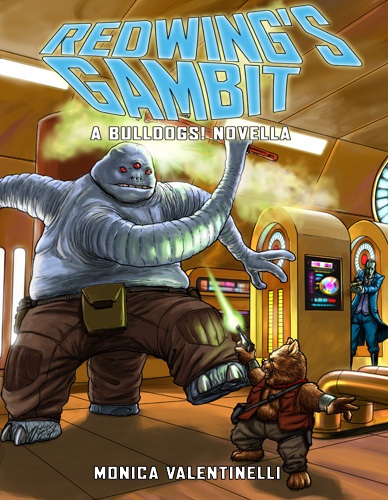 Today, I am pleased to announce that Redwing’s Gambit, which takes place in the fun, romping Bulldogs! universe, is on sale through Saturday, May 13th at DriveThruFiction.com. Written in 2012, this novella is an earlier look at my storytelling — perfect if you’re waiting for my upcoming stories to come out! When Redwing’s Gambit first debuted, I wrote notes on the story’s and setting’s design, and am re-sharing those here in addition to one of my favorite scenes.

If you’re interested, here’s a link to Redwing’s Gambit on DriveThruFiction.com. The story is formatted in ePub and PDF; you receive both when you order the file. Additionally, I pulled some links to design essays I wrote about the novella for you, too!

One of the characters that readers really enjoyed was an angry teddy bear/mercenary named “Fang”. This short scene is Fang’s debut! The angry bear is a stowaway on board the ship, and he’s facing off against a feline robot.

Deep within the bowels of the cruiser, a small bear-like creature crawled through a grimy pipe and dropped down through a narrow opening. He wiggled his way down, down, down until he landed on the floor of a sooty vent.

The animal bared his teeth, hunting for signs of the enemy, but could not see his prey.

Turning a corner, he came face-to-face with a cat. It nudged its cool body against him and purred.

The mechanical noise grated his ears. It wasn’t a cat, it was cat-like. A robo-cat. And it was colored a bizarre shade. Watered down red. No, pink. An albino cat?

“Out of my way,” the creature hissed. “You will move for Fang.”

A clicking sound. Then, a high-pitched squeal. An antenna poked out of the metallic cat’s mouth, its red tip blinked urgently.

The small bear stepped forward, but the robo-cat would not budge.

“Stupid cat.” Fang grabbed the robo-cat’s antenna and yanked back hard. The pink robot yelped in pain, its head spun faster and faster until a thin plume of smoke escaped from its pointy ears. Crouching low, Fang swept his foot and knocked the cat on its back. Then, the creature pulled out the robo-cat’s leg and beat its rosy body with it until he was satisfied.

It was an empty victory.