Friendly Friday: Lilith Saintcrow and the Terror of Squirrels 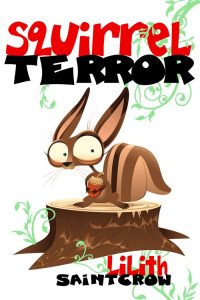 One of the best ways to learn what it’s like to be a full-time novelist, is to learn and listen to those who are doing the work. Lilith Saintcrow is one such writer. This is an author who is not only compelled to write, but who can be found with a pen (or keyboard) at the ready. I admire her ability to navigate multiple genres and audiences, research what’s needed without falling down the rabbit hole, and retain her focus despite the many, many changes happening around her. Through the years, she’s written the kind of books that have provided many a fun romp while fleshing out the depth and breadth of characters like Dante Valentine and Jill Kismet. I really enjoyed The Bannon & Clare Affair series–and not just because I appear as an assassin in it. Alternate history is my jam, because I love the “what if” questions that address the complexities of our world when one important aspect is changed. The presence of magic, a new island, or a battle won instead of lost generates so many questions!

In addition to stories and her writing advice, which she’s compiled in The Quill and The Crow, Lili also has a sense of humor and, as it turns out, a hilarious problem with squirrels. Her history with these woodland creatures is the stuff of legend, and she’s not only blogged about SquirrelTerror! for her readers’ benefit–but there’s also a SquirrelTerror! book as well. In fact, her stories are so epic they inspired me as well. Many moons ago, when Loki tapped my shoulder (Uh… This happens often.) to say: “Hey Monica, wouldn’t it be great if…?” Rewrite a gothic icon to feature a real-life heroine? Never. Right? Ahem. Yeah, so for Fish Fool’s one year, I did. I took Poe’s “The Raven” as my inspiration; I wound up mapping the beats and rewrote it to star Lili and a rather scary squirrel.

I hope you enjoy this bit of fun, and I encourage you to check out Lili’s books and hop on her reader’s bandwagon. You can find them wherever books are sold. For more about this author, you can visit www.lilithsaincrow.com, find her on Twitter @lilithsaintcrow, or follow her on Facebook on the Official Saintcrow Page.

Without further adieu, here’s my poem in all its unabashed glory.

Once upon an evening dreary, while I pondered weak and weary,
How to script an ensuing volume for my readers galore,
While I nodded, nearly dozing, suddenly there came a scraping,
As of some one gently chafing, up against my screen porch door.
`’Tis my fuzzy feline,’ I muttered, ‘chafing at my screen porch door –
Only this, and nothing more.’

Ah, distinctly I remember it was an overcast day in November,
And each separate dying leaf dragged its dry bones across the floor.
Eagerly I wished the morrow; – vainly I had sought to borrow
Whence my books surcease of sorrow – sorrow for a lost amore –
For I’m but a rare and radiant maiden whom the angels named Saintcrow –
A goddess in my house for evermore.

Alas! My children’s laughter, diving headfirst in my box of chocolates
Distracted me – filled me with fantastic delights never felt before;
Oh no! Dear, kitty! To still the beating of my happy heart, I stood repeating
I forgot about my kitty entreating entrance at my back porch door –
My hungry kitty is still entreating entrance at my back porch door; –
This it is, and nothing more,’

Presently my soul grew stronger; hesitating then no longer,
`Dearest kitty,’ said I, `truly your forgiveness I must implore;
But the fact is I was napping, and so gently you came rapping,
And so faintly you came tapping, tapping my back door,
That I scarce was sure I heard you’ – here I opened wide the door; –
Darkness there, and nothing more.

Deep into that darkness peering, long I stood there wondering, fearing,
Doubting, dreaming dreams no mortal ever dared to dream before;
But the silence was unbroken, and the darkness gave no token,
And the only word there spoken was the whispered word, `Saintcrow!’
This name I whispered, and an echo murmured back the word, `Saintcrow?’
Merely this and nothing more.

Back into the living room turning, questions within me burning,
Soon again I heard a scratching somewhat louder than before.
`Surely,’ said I, `surely that is my kitty at my screen door;
Let me see then, why he’s sore with me, and this mystery I’ll explore –
Let my heart be still a moment and this mystery explore; –
‘Tis my kitty and nothing more!’

Open I slid my door like butter, when, with many a flirt and flutter,
In there stepped a stately squirrel of the saintly days of yore.
Not the least obeisance made he; not a minute stopped or stayed he;
But, with mien of lord or lady, perched outside my screen porch door –
Perched upon a gazing ball just beyond my screen porch door –
Perched, and sat, and nothing more.

Then this gray creature beguiling my sad fancy into smiling,
By the grave and stern decorum of the countenance it wore,
`Though thy crest be white and fuzzy, thou,’ I said, `art sure no yellow bird.
Ghastly foul and ancient vermin wandering nightly because you could –
Tell me what thy lordly name is within this Green Man’s wood!’
Quoth the squirrel, `Saintcrow.’

Much I marvelled this ungainly pest to hear discourse so plainly,
Though its answer had much meaning – and its similarity to my own it bore;
Still, we cannot help agreeing that no living human being
Ever yet was blessed with a talking squirrel just outside his screen door –
Bird or beast above a mirrored ball just outside their screen door,
Bearing such a name–or any other–as stately as `Saintcrow.’

But the squirrel, sitting lonely on the gleaming orb, spoke only,
That one word, as if his soul in that one word he did outpour.
Nothing further then he uttered – not his furry tail he fluttered –
Till I scarcely more than muttered `Other friends have climbed before –
On the morrow he will leave me, as my hopes have climbed before.’
Then the pest said once more, `Saintcrow, Saintcrow!’

Startled at the stillness broken by reply so aptly spoken,
`Doubtless,’ said I, `what name it utters is its only stock and store,
Caught no doubt by some rabid reader whose unmerciful teasers
Followed fast and followed faster till his decrees one burden bore –
Till the chants of his hope for my next book his burden bore
Of “Saintcrow” and nothing more.

But the squirrel was still beguiling my remaining kitties into smiling,
Straight I ushered a tuxedo-furred feline in front of squirrel and ball and door;
Then, upon my pillow sinking, I betook myself to linking
Fancy unto fancy, thinking what this plague-carrying pest of yore –
What this grey, grim, disgusting, gaunt, and plague-carrying pest of yore
Meant in groaning o’er and o’er: `Saintcrow.’

This I sat engaged in guessing, but no syllable expressing
To the creature whose beady eyes now burned into my dear kitty’s fur;
This and more I sat divining, with my head at ease reclining
On my cushion’s silken lining that the lamp-light gloated o’er,
But whose lining with the lamp-light gloating o’er,
His memory shall press, ah, nevermore!

Then, methought, the autumn air grew denser, perfumed from an unseen censer
Swung by tree limbs whose bare arms wafted through my window yore.
`Wretch,’ I cried, `thy God hath lent thee – by these angels he has sent thee
Respite – respite and nepenthe from thy owner’s memories from before!
Quaff, oh quaff this kind nepenthe, and forget all that came before!’
Quoth the squirrel, `Saintcrow.’

`Augur!’ said I, `thing of evil! – augur still, if squirrel or demon! –
Whether agent sent, or whether readers tossed thee in my grassy knoll,
Desolate yet all undaunted, on this fairy land enchanted –
On this home by horror haunted – tell me truly, I implore –
Is there – is there books in Hel? – tell me – tell me, I implore!’
Quoth the squirrel o’er and o’er, that one dire word: `Saintcrow.’

`Augur!’ said I, `thing of evil! – augur still, if squirrel or demon!
By the Heavens that bend above us – by those gods we both adore –
Tell this soul with sorrow laden if, within the distance fading,
It shall clasp a sainted maiden whom the angels named Saintcrow –
Clasp a rare and radiant maiden, whom the angels named Saintcrow?’
Quoth the squirrel slowly, lowing: `Saintcrow.’

`Be that word our sign of parting, squirrel or fiend!’ I shrieked upstarting –
`Get thee back into the wood and the Night’s ghostly shores!
Leave no grey tuft as a token of that lie thy soul hath spoken!
Leave my loneliness unbroken! – quit the ball outside my door!
Take thy teeth from out my heart, and take thy form evermore!’
Quoth the squirrel, `Saintcrow.’

And the squirrel, never flitting, still is sitting, still is sitting
On the pallid ball of gazing just outside my screen porch door;
And his eyes have all the seeming of a demon’s that is dreaming,
And the lamp-light o’er him streaming throws his shadow ‘cross my floor;
And my soul from out that shadow that lies floating on the floor
Shall be lifted – nevermore!